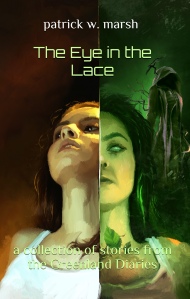 From the World of the Greenland Diaries. Before the Drum, a terrifying form keeps appearing outside a forest, prompting a therapist to uncover its meaning. A champion from war is staying at a hotel when a particular challenger arrives to test her. A widower questions his reality when his dead wife’s garden grows back to life. A sheriff’s deputy in Minnesota retraces the steps of a long-missing neighbor. A strange child arrives in gym class with bizarre wounds and even stranger smell. During the Drum, two security guards try walking home along a haunted freeway. A monster takes pity when a trap clicks empty during battle. A cheat code from an old video game saves a child’s life. A little girl tries to reconnect to her past in the haze of monstrous illusions. Many years after the Drum, a young woman hates her fiendish heritage and tries to cut it out. An art student is introduced to an antique medium, which captured the still living horror of history. A curious teenager tries to communicate with the darkness that gouged humanity. A field guide gets ready for an expedition into the most dangerous place on earth. A conversation at a bar reflects the lack of answers from humanities near demise. A sharp shooter must make a choice between one monster and many.

Since I was young, the suspense of finding out what a monster is and how they interact with characters in a story has fascinated me. I’ve dedicated my life to creating monsters to understand what it means to be human. The stories included in this collection have been previously published, freshly revised, and augmented with new content. I’ve also included some new stories that aren’t part of any other collection. You have multiple genres of fiction represented in this anthology, such as fantasy, science fiction, horror, Cyberpunk and Steampunk to name just a few. There are stories from the monsters themselves, their victims, the worlds around them, and the bystanders. Some tales will be connected to one another. Others will be alone. Regardless. There will be monsters.

Click Here to Purchase it on Amazon’s Kindle or Paperback

For the last 30 years he has been the sole protector of the legendary Diamond Town. Every hour it snows, howls, and storms. Every week, wave after wave of invaders crawl through the woods scouring for a bit of fame and glory on this lost island — and he cuts them all down with indiscriminate slashes of his sword. No one has survived being the Guardian as long as him, and the shadows are seething with vengeance in the forests and mountains.

A vengeful cannibal from a lost invasion, ancient beasts stalking about the mountains waiting to attack, and a fresh new batch of invaders with a beautiful berserker and emotionless captain are simply a few of the festering plagues on this cursed island. There will be no respite. There will be no end to the war and strife. The winters are growing longer, the cold harsher, and the enemies bolder. Take a walk in the footsteps of the Diamond Town’s Guardian and his world, through his own blood-weary eyes. Count your footsteps and mind the silence, it’s time to hunt, and to fill the graveyard again.

Click Here to Purchase Beware the Ills on Paperback & Kindle

Monsters, monsters, everywhere. A Northern Pike with a taste for little boy blood. One lonely robot gardens beneath an apocalyptic storm with a dead promise in mind. A haunted locomotive violates a forest with its underworld track. Two siblings wreck the earth in a dispute of godlike powers. A poetic wraith scribbles bloody lyrics on a ghost town’s windows. The urge to feed sends a werewolf on an annual trip to an isolated lake. A bored and omniscient being is locked in a nuclear prison after having destroyed the earth with just one hand. The dark arts make their own prodigy, and he knows it. A brother and sister hunt each other for the sake of boredom. Fear itself gives life to a doll in the attic, even though he’d rather be dead. A fountain watches a mad scientist maroon an entire village. Toys inside a deserted shopping mall kidnap a little boy to give them a taste of immortality. A haunted highway is the safest place around, if you follow the rules. The oldest hunt on earth between man and devil takes a break for some vanity. A man drives to commit suicide, but is distracted by a siren who never needs her voice.

Click Here to Purchase I Sing Constellations on Kindle 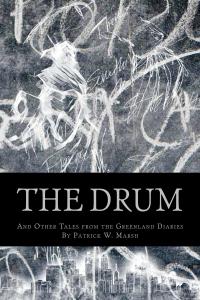 An eerie earthquake with a mysterious creature in the Gulf of Mexico unleashes an unknown seed onto the earth. An old man watches the long-abandoned slaughterhouse across the road gleam to life under phantom light. An immigrant working at a thrift store notices something inhuman in one of the mirrors. A stressed-out father wonders how a dead streetlight starts working under the shape of a faraway stranger. A random burst of graverobbing and disturbing taxidermy hits an old cemetery in Saint Paul. A little girl digs in the closet for a gun as her parents prepare for the drum. A pilot fights an unknown abomination on the star-edged rim of heaven and earth. A little boy counts the seconds through the sights of his rifle before the world gets walked by monsters. A woman hiking in Duluth bitterly watches the old weather patterns be imprisoned by walls of overgrown greenery. A young man plays with suicide on a deserted college campus as living death hunts him every night. A child scrounges for food in an empty restaurant till a sewn-together employee makes an appearance. Three soldiers on the outskirts of an abandoned city plot revenge on the nightmare hunting them.

Click Here to Purchase The Drum: And Other Tales from the Greenland Diaries on Paperback & Kindle

A mutilated dragon with a rare curse scouring a lost airship land, encounters a pirate with the same bestial nature. A lonely little boy on a summer afternoon explores a whispering drain pipe outside his empty house. A family of vampire hunters gets lost in a palace with a host who’s still attached to the sunlight. A grandmother and grandson explore the woods outside their home and get pulled into an ancient and hungry garden. An old man and sea monster share a strange, blood-soaked ritual. An egocentric young man gets lost in the city and stumbles across a tortured and living paradise. A murdering scarecrow takes a break on Halloween to enjoy a little kindness. BONUS – The first chapter of This Living Cage, the sequel to Beware the Ills.

A knight becomes mutinous after a 100 days of dragon fire. A combat vet prefers the void of war to home and peace. An inhuman creature is more than capable of mercy in a haunted cathedral. A lizard and monster start a friendship in the shadow of arrows. A young woman is denied the chance to be herself. Two techs floating in space can’t remember their login information. Rats have feelings too, as this kingdom found out. Goblins aren’t as evil as the ones that hunt them. A long battle in deep space makes nightmares live everywhere. A demonic and hungry forest with a slight sense of kindness. A lonely factory would rather have purpose than nothing. A weapon survives longer than the man wielding it. A monster is going to become a father, and watches a human with the same predicament.

Click Here to Purchase Moya through Amazon on Kindle

The following documents were collected and recovered after DOL 39 broke containment, a direct violation of The Treaty of Three Faces. More information is being gathered post conflict. Anyone with more information please contact your local magistrate.

DOL (Definition according to civilians and the Silver Guard): Devil of life.