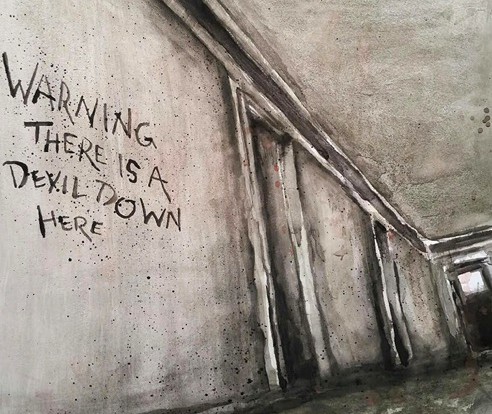 The drive took quicker than I thought to the High Bridge. There were so many times when I worked right next to it as a bank teller that traffic would seem endless. I would get every red light. There was always road construction, emergencies, and events. Now, the night of my suicide attempt, I managed to get there in record time, like some god somewhere was flipping every switch on each stoplight.

Make no mistake, as I drove block to block closer to oblivion, there were no gods anywhere. Maybe I had insulted them in whatever faraway palace of cloud and captured sunlight they might be. I had trivialized them by wanting to end this precious existence they’d given me. My gift of life built of mystic clay, wax, and string, about to be drowned by mud and ice water. Only a few catfish wandering by would see the last bit of life coursing through my veins.

If I could pinpoint what brought me to the river’s edge that night, maybe I would never have sought the aid of nothingness. It was a culmination of things, not just one monster hounding me, but a pack of faceless shadows unwilling to let my mind rest. Part of it was the fact that my current relationship was failing. I didn’t want to start over. I didn’t want to find someone again. I was almost thirty. I was supposed to have a good job, family, 401k, and all those other profile pieces that Facebook demands of you. I didn’t have fun dinners, concerts, or Instagram followers. I couldn’t find a single piece of life to make important enough to share on social media. It was almost like my level of living didn’t exist with everyone else, like I was subhuman, or a category of creature you come across in a catacomb in Dungeons and Dragons.

All I had was another failure, another restart, another click of the refresh button on the browser that was my life. Each time I had to start over, it felt like bits of my body were being taken away. It made a part of my soul evaporate each time. Failure had its claws in me. I was a puppet to its pulls. I couldn’t escape it. Suicide, death, and the end of my existence were easier than facing the unknown, again.

I said a lot of things to myself as I drove there. A lot of it was angry. I was a wounded snake spewing venom. I can’t even remember what was really said to the inside of my car. The music was off. The fan was low and thrumming. I drove a teal Dodge Stratus SXT, an unremarkable car for an equally unremarkable person. The interior was black fabric, it matched the gloom outside the windows, like the outside and inside worlds were both working against me.

The only sentence I remember coming out of my lips against the backdrop of tears, sweat, and coughs was simple and elegant, and it made me feel closer to everyone else who has ever felt this way in their lives.

Here is a raw excerpt from a creative nonfiction book I’m working on. I’m hoping that someday I’ll be able to get a publisher, agent, or someone with some authority to help me get it out there. Nonfiction is emotionally a little bit more demanding for me to write than fiction, because I don’t have a monster to sort of support my metaphors and images. Here it is just me, which perhaps is the greatest monster of them all. Thanks for reading.